In many TTRPG circles a long or intricate backstory is equated with quality role playing. Many role players feel it is essential as a basis for knowing how any character would act in a given situation. This is true and an established backstory (no matter the length) can be an invaluable tool in creating a well rounded character. But the (character’s) story doesn’t end there.

If we equate this to modern life, the backstory would be what happened to you before you finished high school, college, or your early life in general. Extrapolating from there, that background is useful in predicting a person’s actions, but the longer the person lives the less accurate it will be as a predictor. Knowing someone’s past as they graduate school isn’t necessarily going to tell you how that person will act when they’re 35, 40, 50 or older. People change and grow over time. Your character should grow in the same way.

You can do this by pre-planning changes your character will go through, but it’s often better to let changes occur as the story unfolds. You can still allow for changes in your character, but instead of planning certain things that will happen at specified times, just look over your character and be aware of things that they may learn and how those things might affect the way they interact with the world.

1 thought on “Beyond the Backstory” 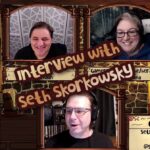